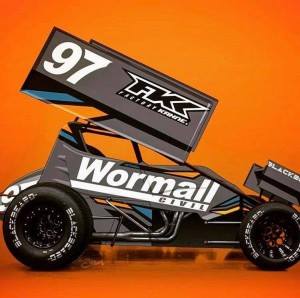 Dominic Scelzi is excited to get to Australia to race World Series Sprintcars in the 31st Annual Tour – SHOWTIME commencing December 26 at Murray Bridge Speedway.

Scelzi will drive for Wormall Motorsport during the 14 round race series that takes in 10 tracks in South Australia, Victoria, Queensland, Tasmania and Western Australia, concluding at the Perth Motorplex on February 25.

“To be able to compete at the highest level down under is going to be exciting,” he said. “It will be a challenge because it’s against the best guys there are in Australia. My game has to be on.”

Scelzi made his Australian debut throughout the 2016-17 USA offseason when he drove for the Wormalls and assisted Team USA to a win in the Origin of Speed, placed sixth during a preliminary night of the Grand Annual Sprintcar Classic and recorded two podiums, three top fives and four top 10s to finish tied for third place in the USA vs. WA Sprintcar Speedweek standings.

Dominc will join Mitchell Wormall as driver of the second of the Wormall Motorsport Maxims powered by KRE and is appreciative of the opportunity.

“I want to thank the Wormall Family for having me back,” he said. “They are like a second family to me. I look forward to getting down there, spending time with them and racing with them in Australia’s toughest national Sprintcar Series. QSS World Series Sprintcars.”