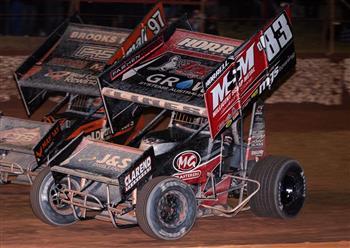 Steve Lines has cemented his role as this year’s QSS World Series Sprintcars spoiler after a phenomenal victory in round eight at Albany Speedway to register three successive wins at the venue in World Series competition.

Lines and the Horrell Motorsport team made the tough decision to pursue the final three rounds of the series in Western Australia despite being ineligible for any championship prize money as they were not contracted to the series, however the lure of potentially claiming the first WSS win for the team and for crew chief Dave Sharman inspired the squad to head west, and they were instantly rewarded.

The much-loved Mount Gambian started the night by qualifying in sixth while Jason Kendrick looked unstoppable to claim Revolution Racegear QuickTime honours ahead of Ben Ellement, James McFadden, Kerry Madsen and Darren Mollenoyux who got the last minute call up to drive the Diamond Bay Motorsport #W26 in the absence of Brooke Tatnell.

Kendrick failed to finish heat one with a flat right front tyre as Madsen grabbed second, with Mollenoyux claiming an impressive third in heat two ahead of Element in fifth. McFadden started seventh to win heat three while Lines retired after the first lap due to a reported driveline issue, casting doubt over his chances to salvage enough points for a good spot on the feature race.

However, Lines bounced back to run second in heat six to lock in to the Bronze edition of the Top 8 Shootout, with McFadden backing up his first round to run second in his heat while Madsen stayed out of trouble on a difficult track to settle for seventh.

The Shootout provided a positive gain for Lines who was able to move up to the third row for the main event, while Madsen lost his provisional front row start to Jason Kendrick who surged from the Silver Shootout to claim the quickest time of the night with a blistering 12.68 second lap and secure pole position alongside the four-time and reigning World Series Champion.

McFadden set a blistering pace from the onset, setting the quickest lap of the race on lap two and within four laps was dealing with tail-end traffic. Kendrick was holding on to second until the Hit 92.9 #W11 began to fade from lap 11, allowing Madsen to assume second, and just 5 laps later, Lines would claw his way up to third, placing the top three in the championship in the top three spots on the racetrack.

McFadden was in scintillating form, dislodging lapped traffic with ease and clearly very relaxed at the wheel, lapping the field up to 8th position and doing everything he needed to close the championship points gap that had opened up to 161 points.. Sadly, his attempt to ride the growing mid-track ledge in turn one turned sour with just twelve laps remaining, sending the Monte Motorsport #W17 upside down and tragically out of the race.

Madsen assumed the lead on the restart with Lines seemingly losing his grasp of the leader until Madsen made an uncommon mistake on the exit of turn four with just seven laps remaining and left Lines with enough momentum to masterfully pounce at the end of the straight to take over the lead.

Amazingly, Lines pulled away right up until the chequered flag was unfurled, but as he entered turn three for the final time on his way to victory, Rusty Hickman caught the same ledge that had earlier claimed McFadden and crunched the Peerless #V40 into the turn-two wall, forcing a green-white-chequer restart.

Lines caught the field off-guard as he restarted right on the entry to turn three and was never headed, while Madsen settled for second and Darren Mollenoyux advanced from ninth to snare third.

The focus now turns to the final two rounds of the series at the Perth Motorplex next Friday and Saturday, where Lines will attempt to defend his seven point lead over Madsen, while McFadden will have to dig deep to salvage the series, sitting 230 points behind Madsen.

The SpeedwayAustralia.tv livestream is scheduled to commence at 5.00pm West Australian time Friday.