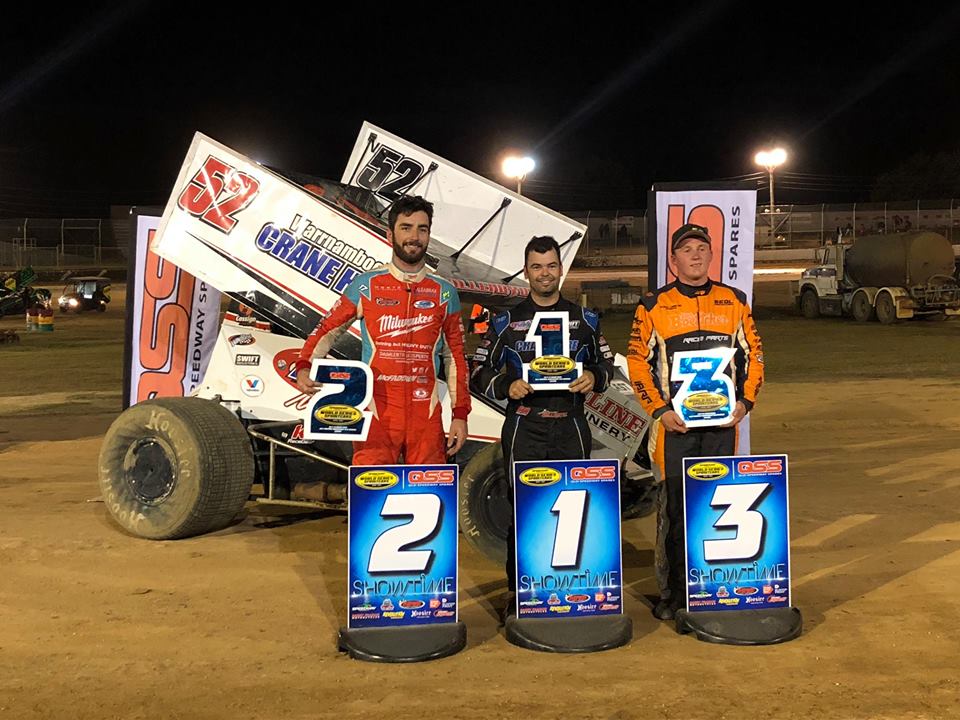 “Molly” started the night qualifying in second behind 16-year-old Jock Goodyer who became the first ever Tasmanian to claim WSS Revolution Racegear Quicktime at the venue, with an impressive 11.457 lap on a very tricky and moist race surface.

Despite only placing ninth and fifth in his heats, Mollenoyux still qualified on pole for the 30 lap A-Main alongside crowd favourite in Tasmanian-native Shaun Dobson.

Sadly Dobson did not complete a full circulation after what seemed like a minor contact with James McFadden in the back straight damaged the left side of the car, sending the VA21 into a mid-corner spin and into the path of West Australian James Inglis that retired both cars instantly.

Mollenoyux was aggressive on the restart and was never headed, however a brutal cushion formed below mid track at both ends, catching out a lot of racers including Californian Dom Scelzi who took a major tumble after skipping the berm and crunching the front straight wall in lap five.

Mount Gambian Glen Sutherland held onto second until lap 19 when a failed attempt for the lead unsettled the car and opened a gap for McFadden to inherit the spot through to the end, albeit with major damage to the front wing that would eventually completely fold over on the W17.

Mollenoyux’s win bagged an impressive 326 points from the round, elevating him to seventh in the overall championship, while James McFadden banked 299 points to give him a substantial lead in the campaign to defend his crown.

The series remains at Latrobe for round nine tonight before heading to Hobart next Saturday to close out the series’ first visit to Tasmania since December 2010.

Livestreaming of the racing will begin at approximately 5pm EDST on worldseriessprintcarslive.com.au