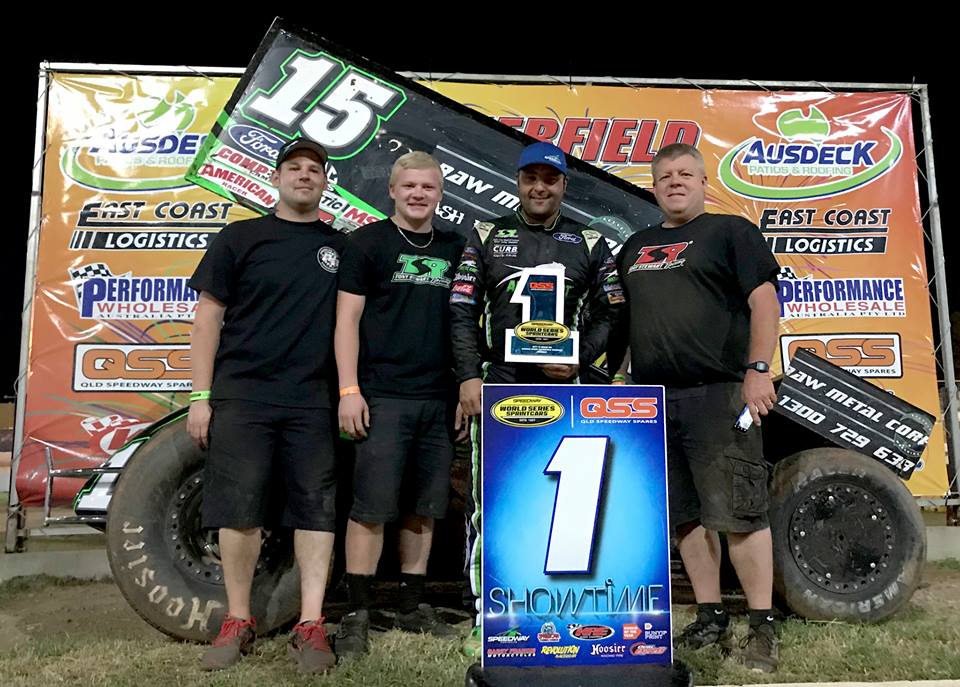 Schatz started the night timing second quickest behind Revolution Racegear Quicktime recipient Luke Oldfield, and moved forward in his heats to bank enough points to start from pole after winning the Gold Shootout.

Wolfe however started from the inside of the third row for the 30 lap final and had to work much harder for his podium finish, patiently displacing Jamie Veal, Luke Oldfield and finally Hobart’s Shaun Dobson to grab the runner up spot in the Ayres Racing #USA5W.

Dobson was the class of the Australians, graduating from the bronze shootout right through to second quickest in the Gold, rewarding him with a front row start beside Schatz.

Dobson held his own for three laps before a pass from Luke Oldfield, but then regained his spot until half race distance where Wolfe took over the second position.

Falling back into the clutches of Oldfield, the two traded blows for the remainder of the race swapping between third and fourth six times before Dobson cemented his claim on the final podium position with two laps remaining.

Schatz was never headed for the entire 30 lap journey, claiming America’s 20th World Series win at Archerfield, but was just as happy to talk of his Australian holiday in the post-race celebrations.

“This is great, being able to race at night while getting plenty of time at the beach during the day, so we’re having a ball and the win tonight just caps it off.”

Pennsylvanian Wolfe was quick to congratulate his team, but was philosophical about the runner up result.

“I thought we may have had something for Donny but to come away with second is a good result.”

Dobson however was suitably pleased with third, especially after a tough campaign in the latter part of Speedweek.

“Dad and Shane Finch have done a great job with the car and I haven’t been in the seat for quite a while, so to be on the podium in this calibre of drivers is great for our confidence and a really great result for our team.”

Luke Oldfield held on to fourth despite a final five lap charge from Kerry Madsen who’d advanced from ninth on the grid to fifth, with Logan Schuchart finishing where he started in sixth.

James McFadden got as high as fifth and as low as ninth after a quick pirouette on turn two just after midway in the race, but recovered to finish seventh ahead of Jamie Veal who had dropped from fifth to eighth after multiple battles.

Dave Murcott claimed ninth while Hoosier Hard Charger Carson Macedo moved from sixteenth to round out the top ten.

Kerry Madsen still leads the Championship ahead of McFadden by 85 points, while Jamie Veal has stepped up into the third position a further 305 points behind.

The series now remains in Brisbane and looks ahead to this weekend’s 22nd running of the Australian Sprintcar Open where Kerry Madsen will aim to defend his title starting on Friday night for the two night event.