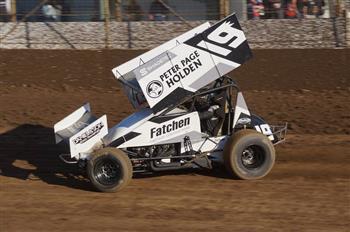 The 30th Anniversary World Series Sprintcars Championship got off to a disappointing start at the Murray Machining and Sheds Speedway at Murray Bridge with rain cancelling the event following the heat races. Despite the best efforts of the Management Team at the Murray Bridge venue it was decided to holt proceedings with persistent rain sweeping across the area.

The opening round of the 2016/17 tournament attracted a field of 33 drivers with combatants from across Australia representing five mainland states but it was the locals who paced the field during time trials with Brad Keller recording a lap of 11.622 edging out Ryan Jones, who was in the first pairing, by .001 of a second. The top five in qualifying was rounded out by defending champion Jamie Veal (11.726), Brooke Tatnell (11.744) and Matt Egel (11.764).

The Time Trial session wasn’t without drama with the caution lights coming on for a couple of incidents in turn two as Luke Bowey rolled is #55 after clipping the wall while Western Australian Jason Pryde made hard contact with the concrete in the same spot. Bowey would unfortunately take no further part in the event after being taken to hospital after reporting a lower back injury.

The six heat races that were conducted were full of action with the track allowing for some great side by side racing with the fastest qualifiers regularly making their way towards the front from their back row starts.

The opening heat didn’t go to plan for Keller as he made contact with Steven Caruso after Caruso spun in front of the field leaving Keller with nowhere to go. The contact cut down the right rear tyre on the #19 Maxim. Hayden Pitt would go on to record an easy win ahead of Jake Tranter and Daniel Pestka.

The second heat saw Daniel Harding take the win but he had to work hard to get the better of Keke Falland, who was campaigning his trusty 360ci Ford. Queensland livewire Lachlan McHugh made an impressive MMS debut as he stormed his way to third ahead of Robbie Farr.

The final heat of round one saw Craig Vandestelt score the win by 3.459 over Todd Wigzell and Jordyn Brazier with Jamie Veal charging from the back row to finish fourth ahead of Luke Dillon.

As he did in the opening round Hayden Pitt utilised his front row start to perfection to record his second heat win of the night in heat 4 defeating Chad Ely and Robbie Farr, who had a great duel for the runner-up spot. Contracted WSS driver Andrew Wright managed to limp around in tenth spot with a damaged top wing after rolling his #78 in turn four on the opening lap.